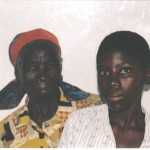 Missions brings with it great joy, but it also brings its share of heartache.  Meet Etah, our deepest heartache.  I met Etah in 2007 when she was 14 years old.  She had been brought to an AIDS clinic where I was helping.  Her examination and lab work told me she was most likely within her last month of life.  Her history began the heartache.  When she was 10, her mother who was a widow and using everything she had to obtain income, used Etah for that income by prostituting her in the village.  Etah was a fighter and had to be subdued with traditional herbs, leaving her addicted.  Here she was; 14, addicted and dying of AIDS.  After meeting her physical needs I asked my interpreter, a young Zambian woman, to help me present the Gospel to Etah.  When I started the young woman would not translate what I was saying.  I tried again and still she refused.  When I pressed for an answer as to why she would not translate the Gospel for me she told me she was a practicing Jehovah’s Witness and would not share anything but the doctrine of the Kingdom Hall.  There was no other interpreter present who could interpret the dialect of Toka Leya for me, and Etah and her mother left that day without either hearing the blessed hope of salvation thru Jesus Christ.  I never saw her again and know that she did indeed die within that month.  I grieve each time I see her picture or when she comes to my mind, knowing that for the past 7 years, after being tormented here on earth she is in Hell and will be in eternal torment.

This site uses Akismet to reduce spam. Learn how your comment data is processed.